Sealegs stops to say “Thank you”

World leading amphibious boat company, Sealegs stopped to commemorate the production of their 1000th boat by saying thank you. David McKee Wright opened the presentation saying “it’s a privilege to be part of the team at Sealegs” and recalled the early days when he and Maurice first discussed the idea of amphibious boats.

Maurice Bryham went on to outline his initial idea and tell the story of what the pair call “the decade of discovery”. They showed images from early Sealegs days, development projects and released a video and book featuring some of the highlights during ten years at Sealegs.

‘The Decade of Discovery’ picture book

David paralleled the history of suit cases not having wheels where today they do saying “I’m not saying all boats one day will have wheels but I see no reason why a significant proportion of them won’t.  He talked to the achievement of 1000 craft and Sealegs being great brand ambassador for NZ. “Sealegs represents the best in kiwi lifestyle, we ski, fish, explore our beautiful coastlines and enjoy our country, when people see Sealegs in 50 countries around the world they think about our lifestyle and the special place NZ is.”

The pair then came to the reason for the night’s presentation. Maurice acknowledged all employees past and present, suppliers and shareholders. He said “Sealegs is a team effort and they should all be proud of pioneering an international market in amphibious boating”.

Maurice and David then presented awards to some of their suppliers and employees. 10 year supplier awards went to:

McKee Wright said all the staff deserved an award but the ones requiring special mention were:

The presentation closed with the pair thanking everyone again saying they were looking forward to Sealegs achieving a lot more in the future. 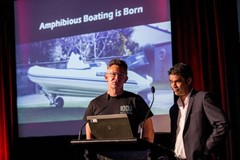 Interested in a Sealegs?
Enquire below to learn more from your local Sealegs office.